MMORPGs: Class is in Session

Point. Click. Wait. Does this seem familiar? This formula seems to pop up everywhere in the world of MMORPGs. I know this because I have played many MMORPGs. Now, don’t confuse this article as some sort of boredom-fueled rant about how the genre needs a revolution. I’m not going to yell at you in caps lock about how there are too many generic MMORPGs, too many three-kingdoms based MMORPGs, or too many games in the genre in general. I simply want to talk about one thing: potential.

When you play one of these games, you generally must choose from a variety of jobs or classes for your character. What are you really choosing? In many cases, your choice represents a series of armor sets. There are usually a dedicated set of skills for each class. Sometimes certain quests are only given to certain classes. After these distinctions, the differences become quite superficial. This system is easy to develop for. The classes all play in the same general fashion (click, spam hotkey sequence, repeat). This makes it easy for developers to create new content. The problem is that no matter how interesting the content may be, the gameplay is still the same between classes. Why create such an arbitrary choice? I don’t think the issue is that there aren’t unique classes, the tools are all here already. Developers can take the common MMORPG classes and make them truly interesting and different from each other.

Does it even matter?

Now, zoom out for a bit. Broaden the scope of your mind to include all genres. When I say warrior, what genre do you think of? I tend to think of the action genre, and I think about games like God of War. Kratos is a warrior, I would never doubt that. Warriors in games tend to care about certain things and handle problems in ways specific to them. Kratos would be a horrible Black Mage. Mages have different cares and concerns, and they certainly have different methods of dispatching foes. 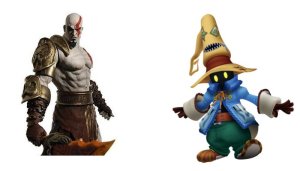 These two could never switch games.

If we can agree on this, then why do the classes play so similarly in MMORPGs? Pointing and clicking works well for using magic, but if I’m a warrior, I want to attack multiple targets fluidly. It makes more sense for a warrior in an MMORPG to play like a warrior play in an enjoyable action game. What about summoners? It seems like they would be better off with the controls of an RTS. It simply makes more logical sense that way.

MMORPGs are virtual worlds. Character classes can easily become virtual lifestyles. So, what about professions? Do warriors care about herbalism? Maybe not, but I’m sure they have knowledge of weapon crafting and maintenance. Perhaps a rogue can tell you if that mushroom you’re about to eat will kill you or not.

Obviously this is a hard system to implement. It’s almost like creating multiple games. Developers would have to test new content individually for each class. Even so, this explanation is very extreme. Nothing stops a developer from taking a few extra steps to make the classes actually play differently. It would certainly open up the genre to a new audience. Players would choose a class based on how they want their character to live and move, not a set of numbers and animations.